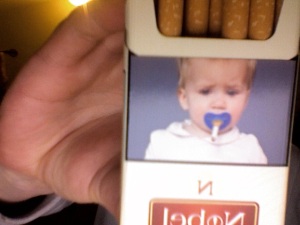 I´m a… baby killer!
he’s name was Miller in my dark thriller
smoking him up
yup
killing him slowly
doing so enjoyingly…
what is wrong here?
smoking packs
are really regulated by political hacks
buying packs government gets my money through cool taxs

Cigarettes are legal.
The government takes a big chunk of taxes from each pack bought
exactly 23%, bunch of idiots that we have sought.
They want me to feel bad now putting up crazy pictures?
I’ll go check the scriptures, then
do not take 23% in taxes
hypocrites
with their false politics

I´ve been analyzing this  video for some months and finally I understood the poor little creatures.

At least now they have a voice. 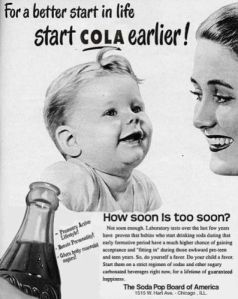 I know I have no kids, but I do intend to adopt Makumba. He´s from Africa and I´ve been paying for his education for quite a lot of years now. I know this, because here in Spain is very normal for people to be seen walking or sitting in the park eating seeds from a little bag. It´s like in the U.S with baseball players when they´r eating them  while they´re on the bench, well here we eat them in a lot of places. Now, in that little bag of seeds on the back side there´s a picture of this cute African kid, and there´s a logo of UNICEF which tells me that every time I buy a little pack of seeds I´m helping him. So there you go, I´m helping Makumba. Soon enough hopefully he´ll be back here in Spain. So I decided to scratch my head a little and have come up with what I believe are solid parenting advice.

-If the baby doesn´t want to go to sleep, put some whiskey in his gums. Not saying to pour the whole bottle down his throat, but just a little dip of that beautiful substance in his little gums.

-If whiskey does not do the work, then you yourself drink the whole bottle in one chuck. You will go to sleep.

-If you´re having problems with the baby sucking to hard on your nipple or biting your nipple, guess what? Bite him back on his nipple. That will make the child realise by example of physics that what he does is incorrect.

-You can also suck on the kids nipple if he´s biting you, that would make him rethink his own strategy. It´s called reversed psychology.

-If he also doesn´t let you sleep at night, there´s a simple remedy to it. Shut his door, put on some soothing music in your own room with your own door shut and  that will make his cries go away thereby allowing you to have a good night rest and be a better less stressed out and more productive parent in the morning.

– The kid should always wear socks at all times during the day, no exception. If not he´ll be sick in the hospital in no time.

-Stop breast feeding after 4-6 months and give the baby water and corn syrup.

-If you have problems with the baby to hang on to your tit, dip you nipple on a jar of sugar. That would make the baby go for it. Even your spouse may join in so it´s really like a great family gathering around the table for a nice dinner.

-If you see that baby biting on things, it´s always good to have a dog with you. Just take away the bone from the dog and give it to the baby. Dog´s odour has proven to be not so tasty for little kids so it should make him think twice about biting things. This way you don`t have to scream at him or innumerous  times since it can cause resentment in the babies psyche and he can grow up to be a mean nasty little boy/girl.

-Almost forgot, never take a bath before you´re about to be due with the baby since there are chances that the baby may drown. Just a quick shower is all you need.

-Do not, I repeat do not cut the kids hair before he starts walking since this will take away his strength and he/she probably wont start walking until he´s 5, an d in return you´ll have to carry quite some weight on a constant basis. Not good for the back.

-Almost forgot another one before he´s born, don´t ever raise your arm above your head, there is a 50-50 chance that the kid will get tangled up on the umbilical cord and suffocate.

-Don´t have cats if you have a baby. Very important also, after the kid has been fed, the cat will smell the milk on the kids mouth and go for it which can result in the cat suffocating the child.

-If the baby has acne, then take a pee diaper and rub it against his/her face. It´s proven to work scientifically. Might sound a bit disturbing but NHO(National Health Organisation) says it works.

I know it´s seems more for women than for men my advice, but at the end of the day we are in the 21st century and men now a days should be much more involved, so this is a reminder to the male population too. Hope I´ve been of help.