I just thought I’m going to post until nobody reads,
you forgot your seeds and the piss.

Damn, is 2:15 a.m and I was going to say that I was bored as hell but not really, I just spend the last 3 hours writing a short story. Later on I started thinking, which is rare for me I just do it once in a blue moon.

I should have done a bunch of things this month, that includes shitty jobs, see the social security gal that advises me in my economical situation and what type of helps the government is throwing away to people like me, getting pissed drunk and having sex with some random chick, have to pay the bills for my attorney and the the court fees so now I´m broke again. I was going to move to a bedroom in a house with two other people next month and that wont be since I have a broken ankle and have to take some pain medicine, keep the leg up and then stick a needle that is suppose to not let the blood clutter since I´m not moving, plus 10 of those needles for ten days just cost me today 50 euros, and I have to inject it for 6 weeks it´s what the doctors said that I should be with the cast and moving as little as possible. Then I have my two parents who are sick, and me…damn again.

I would like to write some sad story as I see in other blogs, or some sorry words, or some profound thing about life and mortality or some thing like that. And I have been closer to mortality than probably most of the population on several occasions and I just can´t say anything like that. I feel like laughing at the whole situation. You had to see me on crutches walking down to the garden and feeding the two dogs, freaking bastards. Then up and down the stairs again to get ice for the foot, and since I see that both of my parents are getting worst I finally told my mother to go get some sleep that I could manage the meal. That was a joke to see me bumping into things, though the spaghetti came out quite nice. Try to do all those things with just one leg, plus grabbing the plates, e.t.c. Plus the pain, I had to laugh at my situation.

Why dichotomy of me, because I´m terrible at regular day to day things, most of the time anyways. Then my drinking problem.  But when the proverbial shit hits the fan drinking and party goes out the window,then take  care of two people while you are on crutches and in pain and take care of yourself, but the last thing that crosses my mind is to feel sorry for myself, and I have absolutely no sentiments towards me or my feelings. I know I have to do A B and then C. Whatever it takes, but it has to be done. And I do it. Which is why I have always said that I go in what I call my “robotic mode”. Crying or getting anxious in this moment because of health situations of my parents is not going to solve a thing, so that´s discarded and let alone me with the freaking pain and crutches stumbling around the house and garden and later on this next week I´ll have to go to the doc and eventually see the social security worker. And it is quite tiresome walking with one leg on crutches and specially with my own health having sever pancreatitis that has left me very weak since I do not take as much care of myself as I should. But, when situations like these come at me….hell, I don´t know what happens to me but I´m great at reacting and solving the problems at hand.

*As the title goes it was written on this 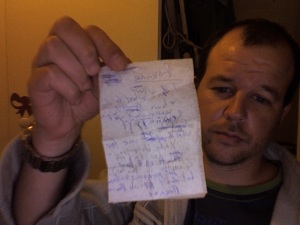 in a dirty napkin late at night in a nasty bar full of lost souls, poor souls, bastards, sluts, criminals, the best of each house really. *

I don´t know what to do
You cunning
That is what´s got me coming
You know…..
Just put you´re own show
To subtle that is how
And don´t let me know

Riding the two whores
not an insult it´s just the reality with real dingy gravity
poor souls they say? fuck´em, they´ll play you like kid on puberty
i got me in, now i got to get out, how what now what, screw that
gonna choose that. I´m out baby girls.