You got to understand that I never had a close relationship with my father,
I´m not crying about it, I don´t have a grudge for him, nothing.
What I do have is being able to say this man is my father, I´m just proud what he became.
At the very least he always, I say again, always has helped me.
But it is just not in his nature the love and hug and expressing himself,
in a pussy way really is how I myself view it, not him.
So I got off the phone today with him talking about my mother and he ends
the short conversation, “see you, hugs”, I don´t know what the fuck to say
so I clicked off. Hugs…. Each family to their own, each person to their own,
I can always give a kiss to mommy, but the father… just weird and I do love him to death.

Sorry for that one, it stuck in my finger-mind, I must be blind… hold it

Things that matter, my mother is probably ashamed and desgraced by my new name phrase,
but even when she tries or not, not really sure actually so that came up fantasically,
She is what matters, regardless of anything going on in my Crazy Life.

Get out and fuck this shit, Jeeeesus. I´ll talk to her later. Things that matters.
Dad you are the King also, what a cheese post…no wonder. 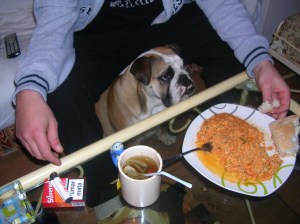 Fucking dog, but she is part of the family
For me yes, ther are families and bad families,
For me dad and mom are perfect. Period.
I´m not an idiot, coma
I have the Corona
And I still remember… a lot, good and bad as well, all you do
drinking the water Perdu(spelled that wrong?)
Family, mother softly dying with cancer-e
But she will kick your ass, forget about mine already kicked,
it really does comes down to that in my situation.
Family is my mortality.

7 p lus m, out of here, 6 posts in one day, get the fuck out of here,
I did enjoyed reading you for sure. And I hate when people…. out of here, time to go to work the dark side.

I´m going wild here, I´m a wild rider, I´m the lion chasing the gazelle, or the gazelle that needs something outside to motivate it to make it spring into action and run….but to a destination. Found my why long time ago, why, why is it that pushes me. Just saying, my brain is going rapidely and I´m just typing away to get away probably or not just love it that way. I´m just put it on in paper, paper-view! That´s cool. Every time I get a view or a hit I should get paid and then laid. Lately I masturbate too much and usually Frank Sinatra´s voice is playing in the background as I do my thing. It´s strange.

Wasssuuup God, don´t know if you´re up there or not. Sometimes I believe and others don´t. You´re like a woman to me, you´re damn confusing. Why do you let good people die and bad people live? Why not let all the bad people die, you created the earth so fuck it, it´s your job to make it better. People who really believe have told me that you had my path predetermined since before I was born. So I guess it´s your fault I dropped out of college, I went into the army

,  I went to two fucked up countries and did your ultimate sin there

(yep that´s my crazy 24 year old version of me, still crazy though). Your fault I´m a drunk,

although I´ve been sober for quite some months now, but have pancreatitis so that´s your fault,

(yep that´s me when I got out of the hospital after two months stay and 18 of them days in the freaking ICU, that´s as close my body really has been into shock or almost die than even in war zones,tha´s fucked up) why is my uncle dying and I have to sit and watch it day by day by day gettting weaker and weaker, that´s your fault too. You made me a fuck up. Someone had to be, go pic my nexdoor neighbour he pisses me off. So I´m me, and only me, so others are not me which is cool with me. The real me. Hahah, try that one, prompt: write a hole paragraph with as many “me” as you can. Or don´t do it,screw it. I´ll tell on you. To God, my man!