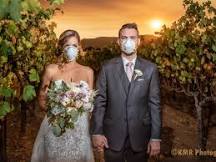 I literally live near a church which by the way the freaking bells are driving me a bit nutty.
Strolling around yesterday I find “The Wedding”, what is the definition of weird?
A wedding (which after my mothers death last month was good to see the happiness of people)
A wedding is weird when you see people standing apart, with masks, seemed I was watching something
out of a movie. No, the new normal that is. I was actually glad for those two. Hope they last,
I guess maybe since if they are willing to marry with these circumstances… who knows, just hope.
After all my personal tragedy it was good to see a wedding, although I still have an issue with the
freaking bells ringing every hour. Shut them down! I do believe that even the wedding entourage had
clocks on their wrist.

Have a great day animmators and innovators.

Stay Frosty gents and gentesses, me? Gonna have another beer, but hit LIKE, it down Look!

I did´t know about this Candance Owens that you were married to a white guy,
and he is Brithish!!!
There is a interesting dynamic there. Apart their political views match most of the times
not always. Their own personal history is what I have not experience, but this woman
and I actually nick named her “The girl”,( I always nickname people including my mother)
This woman is tough as nails, she is where she is because of some reason and she married
this guy for some reason. A good reason that is, smart strategic move, smart love move
which is more important, and just overall. See the video if you want and can.

I got the solution for Corona Virus,
people already are doing it so is no Einstein solution,
You have my self proclaimed girlfriend on my father facebook,
i got that hook plus others got your book.
Just see all the hookers! If she fucks for money by definition
without edition that is a whore, so the new venture is to sell them to guys that want to have sex
during this period of time.
They should make me president of the universe, hit the like button bellow please.
LIKE

I know what I know
each to his own but is simple,
do what or not do think is legaly correct
no police you must have the effect

I´m 37, lost my mother on the 14th of last month. The woman that literally raised
me by her own since father was always working and providing for us.
I don´t recall a so called “father figure”. Now he lost his wife of 50 years,
who he calls? Me. More glad than ever and I strangely find myself in a position
when I feel like I was 25 in the army in Afghanistan in charge of 4 guys.
My father is obviously not a cushy man, I have always thought he was superman in my eyes,
now I see his vulnerabilities and I hate that for him, like in the army days with
4 guys in charge I was at age 25, so I keep the conversation light, to the point,
keep his mind off our tragedy and move on. I actually told him to move on, apart from other things.
And I am talking both about the person (my mother) that raised me and I could always call her
laugh at my crazy things. Now the roles seem to be reversed, and I will reiterate again that
my father is a tough motherfucker. He called me that by the way. But he is human it seems,
seems now to me. I only say that if I have something good going for me, is to put the tragedy
of my mothers death behind of my head in some black box, (like army experience) and the way
I talk to my father, the tone, the things I say, are reassuring for him.
Kind of weird thinking he was superman and never had a real conversation with him.
As I told him, we have to adapt.
If he called me this afternoon I inmediately knew he as a human has to talk to someone
about other things that is not work.

Whowç are you
Had in some moments dig down
A Tçugh Motherfucker according to my father,
sing me operate when mom was dying, oprate I mean spending
9 days she was in a comma, plus add 6 other days she went obviously bad
but stil able to laugh at me. I literally saw her day to day descending into death,
who the fuck am I ?
I wanted to call my father 2 hourss ago, just to hear his voice and in my head said a goodby,
I live in a shitty town full of Marrocans I do call them out and not only call them out for their thefts,
they did steal one of my friends bar, so I will call them out and then goes the fighting, I told the idiot
what was he planning, since I don´t care I´m already dead, my mother hopefully she does not has acces
from heaven to this weird platform, point being, you fucking idiots as the day before yester could
make me a bit off if you physically to attack me, you know it. Going to teach you… Yoga?
Maybe a toga goes better in the neck, little dumb shits these ones.

My heart is gone
not to the sun,
it´s already broke even gave him a smoke
what are your options?

There are quite the variables but I can stick with two or three or just fucking read and hit like,
de-escate the situation when the guy gets nervous by just changing the subject that he feels comfortable in,
Two- let them see you for who you are, but you don´t wan´t to get yourself to that point,
and that point is his death point.
Three-Is not in me, but you can always run to … church, or the police, but is better to make aliances
between those groups with some, and they will literally fight between them for me having to pull a
knife out on one of them.
Just a curious thought, a real one, stil curious to put it mildly, but in my small town
very bad people, at the end of the day it all comes to word, RESPECT. They know that if you fuck with me
nothing good is going to happen, then others in that group will ask me and ask questions to see my response
and I will give it to them sincerely, at the same time I am establishing a relationship for good in that
moment since the moment can always change in a second, not these past months though after I basically
stabbed one of them when he tried to rob me, not even a stab was it was a quick slash on his forearm
when he went to hit me, plus two other guys next to him. I just thought that take the so called leader out
and normally as they did, will run. Today back to see the situation…. all good.

I don´t even know were my mother is, my guess it would be with the “company”,
now the fucking dog has to be operated… what the fuck,
it´s one after another, and I would make the comparison in some strange way that is,
that now is my father alone in the house, and as much the dog drives him nuts who is
the one taking care of the dog? My father. Obviously no comparison to loosing his wife
of 50 years,( and my mother) but that little devil of bulldog will be one solution to a lot of other problems.
My crazy Tina is her name

CRAZY LIFE
Create a free website or blog at WordPress.com.